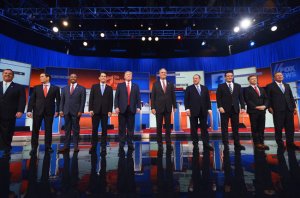 Presidential campaign debates-not exactly the sort of entertaining fare most people look forward to, invite friends over to watch, or DVR for the next morning. No, they tend to be for the viewing pleasure of those few political junkies, fodder for cable news pundits, and as reinforcement of political party rhetoric. But not so this year. Though I love politics, even I don’t usually tune into the debates until further down the campaign trail. But this time, my DVR was set days early, and I eagerly sat down to watch from start to finish. (And all the interviews and commentary after). I’m sure I wasn’t the only one, because, well, you just knew it had to be good. Yes, I actually am someone who cares deeply about the direction of our country, and was genuinely interested in hearing from a wide array of candidates who in many ways haven’t differentiated themselves from the group yet. But then there was Trump. And I couldn’t help myself.

Honestly, I was hoping he would have several gaffes that would prove the death knell of his campaign, and in that respect he didn’t disappoint. But, as the news after was quick to point out, many people still support him. This truly perplexes me to some degree, even as a moderate who leans conservative most often.

Hearing all of these candidates speak, I was often inspired. I mean, who isn’t for keeping America safe, speaking on behalf of the people, unifying diverse groups, and even, dare I say it, “Making America Great Again.” But as a history teacher, I know that time and again, politicians promise the moon without any game plan on how we’re going to get it down here. And usually, my response is that voters need to hear specific details from these candidates on how they will attempt to achieve their goals, instead of just painting us their plans with broad strokes. But after tonight, I began to reconsider that position. Certainly it’s important that potential presidential (and congressional) candidates have ideas on how to solve problems. I mean, preparation is always best. But as history also teaches us, situations arise that presidents are not prepared for. And all that fine rhetoric from debate #1 (and #2, and #3, etc.) are often for nought. 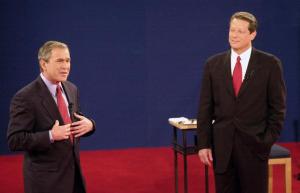 Consider our recent history. George W. Bush may have discussed a vision for foreign policy in his campaign up to the 2000 election. But at that time, we were in an era of relative peace, and it certainly wasn’t the primary concern among voters. But one year into his presidency and it became the quintessential issue of his entire term. In that situation, his prior ideology on foreign policy and terrorism had to come into play. Perhaps. But     it’s probably a fair assumption that those previous stances weren’t far-reaching. And they certainly didn’t include a strategy plan on how to lead a nation after planes are hijacked and crashed into major American landmarks.

So what does all this mean for voters? How do we decide who is our best choice? Some may feel that this is the reason why keeping up with campaigns is a waste of time. I’ve heard many argue that all politicians lie and are hypocrites, so why care? And sometimes I feel myself at a loss to defend the system that takes up so much of my thoughts and interest. And though American campaigns are arguably far too long, I think that there’s at least one reason why we should keep up with it all.

What type of person we elect, matters.

He (or she) won’t have every possible situation figured out, and they can’t anticipate political, domestic, or foreign struggles that will occur. But who they are lasts longer than any plan they could have created. Their character, leadership style, tenacity, ideology, personal experience, (all culminating in their personal worldview and lifestyle), will continue into that White House.

Granted, this is hard to grasp from carefully crafted speeches or debate answers. But no one can follow any established script perfectly. Debates are a great way to see the true person because they almost always “slip.” Even a polished politician will be thrown off by a particular question, or by anger at another candidate (Rand Paul, exhibit A). This week, everyone expected Trump to be entertaining in some way, either by being more professional than he’s been in the past, or by being his raucous self. And either way, there would have been insight into the type of man he truly is. So what we saw really demonstrated that he lacks a filter, a true political strategy, and is misogynistic. Which brings me back to my point.

Even though many Republicans may admire Donald Trump’s brusqueness,  his tone does matter. Even if you agree with the general idea of what he’s trying to communicate, the fact that he cannot say it with any great amount of grace speaks to his character. Knowing how to show restraint in your demeanor and conversation should be a great quality for a presidential candidate. This shows they are tempered, patient, reflective, and concerned about how they are perceived, which should transfer into concern about America’s perception in the world as president. 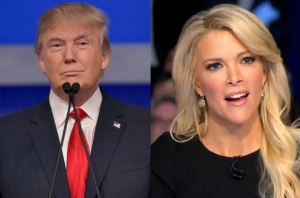 When politicians choose their words carefully and with grace, they demonstrate that they have the ability to see someone else as a human; someone who, though they may differ from them in ideology, and could be wrong in their thinking, nonetheless has an argument that they have arrived at based on their reasoning and personal experience. This is the bread and butter of politics; you don’t steamroll-you reason, you persuade, you debate. Not qualities someone like Donald Trump really has. Sure, he may have been able to be his aggressive self at times in his buiness arena, but ultimately, is now coming to see the harsh reality of the political world. Which, ironically, is maybe less harsh then himself.

One thought on “Avoid Disillusionment: Why Presidential Campaigns Matter”